I know it seems like the Fairy Dust project was abandoned, it wasn’t. The crowd funding campaign did not succeed….for the moment. I mostly blame myself for not giving you what you truly deserve to decide your support of Fairy Dust…..a fully completed episode. 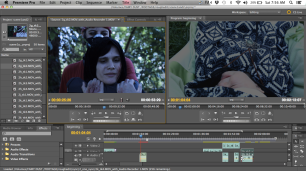 Point being, *I* haven’t forgotten about or abandoned Fairy Dust. I put too much blood, sweat, and tears into this to just pack it away in the land of the lost (Haha, Land of the Lost). There’s just been a lot going on and life threw me some unexpected curve balls, but I’m crawling out of the land of uncertainty and working on this thing. Since I actually had some settle down time over the holiday, I have been working on the final edit, thanks to Steph for doing half of that work for me and Spence Greer for the VFX work done so far…..unfortunately, we will not make our December 15th release goal…when I have more info I will share. Look for a relaunched crowdfunding effort in February. I know that’s really far away, but right now the production team is me, myself, and I in the middle of a lot of life insanity. Sorry guys, I will hit February with a much better prepared campaign and a re-built support team. More soon.